Cooking through the night

At 3am today Mavis had a bad dream and decided to join Whizz and I in the marital bed. This arrangement caused me to be the ‘filling in the sandwich’ and when Whizz decided to give Mavis and I a cuddle by wrapping his arm over me and round Mavis, well, I nearly expired. I am a woman of very few hormones, I get hot, I did. I left – for the spare room. I lay, staring up at the ceiling as wide awake as if I had had a full night’s sleep instead of just three hours!

By 4.20am I had decided there were more interesting things to do than lying in bed with a lumpy pillow – serves me right for giving all the reject bedding to guests – listening to the heating or something, glooping and gurgling. It shouldn’t have been the heating but it came from the pipes. I got up, donned the spare robe on the back of the door, which just about went round me, and headed for the kitchen.

By the time 7.30 arrived, time to wake Mavis, I had baked scotch eggs and made chocolate ice cream and vegetable soup. I was ready to go back to sleep but sadly the day had begun.

By 9.30am I was back in bed and slept until midday and I don’t seem to feel any worse for the experience.

Mavis had a friend to tea and they both scoffed a homemade (well the dough was bread maker made) pepperoni pizza, with carrot sticks and apple juice for vitamins, followed by a bowl of my ice cream. Later Whizz will have left over roast beef from the weekend and I will have a scotch egg and salad. 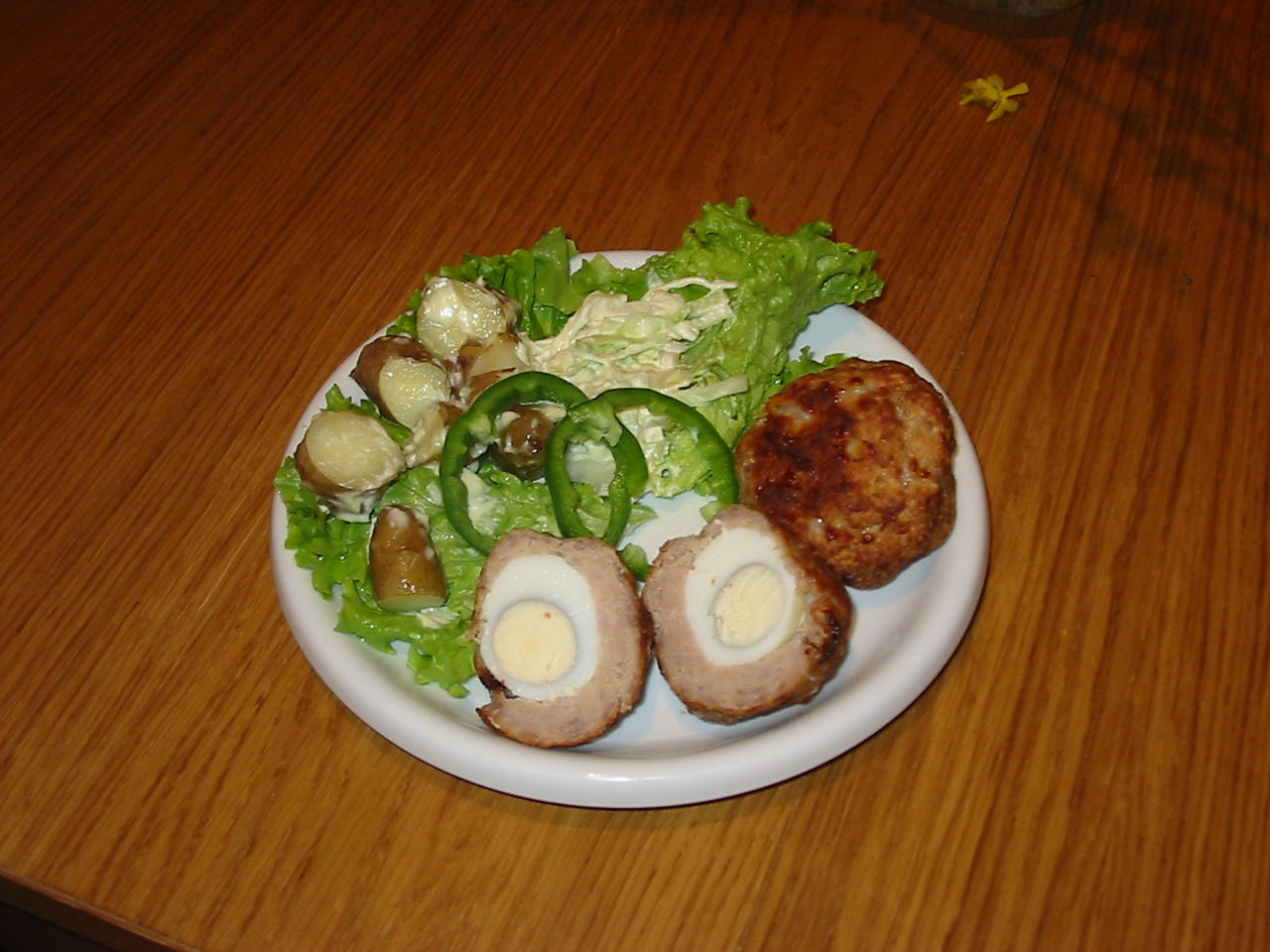 Home made scotch eggs, home made potato salad and coleslaw (that isn’t a cricket in the backgound but a dropped winter jasmin flower)

This recipe is simplicity itself as the eggs are baked in the oven rather than fried in breadcrumbs.

a bowl of water

a roasting tray lined with a silicone sheet

preheat the oven to quite hot 400/200/6Wet your hands and take a dollop of sausagemeat, about one and a half times bigger than the egg.Press the sausagemeat into a flat disc in the palm of one hand using the palm of the other to press it flat and wide enough to wrap roughly round the egg.

Keeping the sausagemeat on your hand, put an egg into the middle and, wetting your other hand again if necessary use both hands to close up the ends of the sausagemeat round the egg.

Keep pressing and smoothing to join up the edges and get an even thickness of sausagemeat all over the egg, if you can.

Place the sphere into baking dish and continue to do the same with the other eggs.

Bake in the oven for about half an hour in a fan oven, longer in a normal oven, until brown but not too brown or they will be tough.

Cool and serve with coleslaw and salad 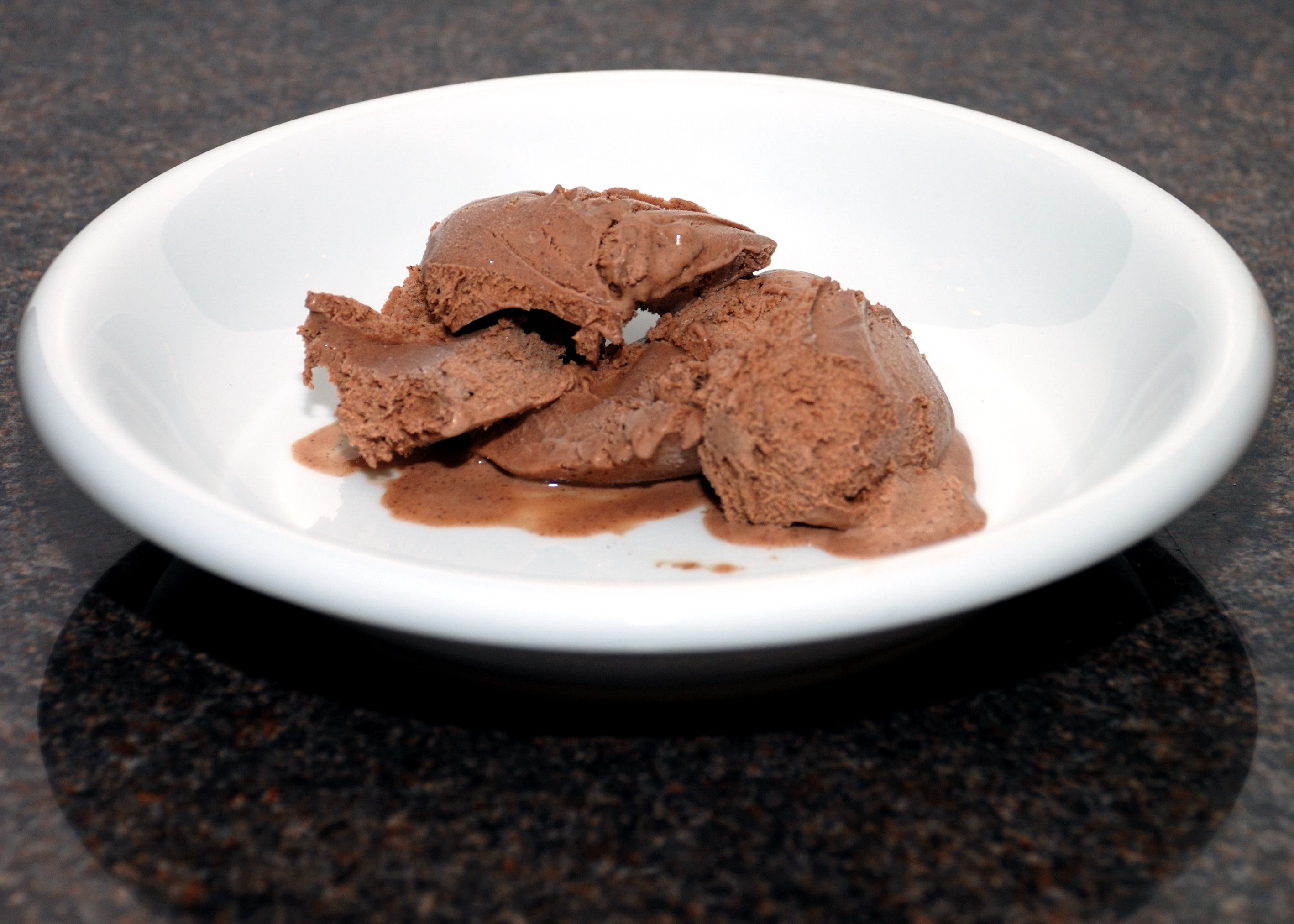 Switch on the ice cream maker to chill

In a pan heat all the rest of the cream with the grated chocolate until it is just beginning to sizzle round the edges.

Return the mixture to the pan and continue to stir with the heat turned down to minimum. If the egg starts to scramble, raise the pan away from the flames/ring and keep stirring. You need a thin custard that clings to the spoon; about the consistency of the single cream you started with.

Now, you are meant to let it cool before putting it into the ice cream maker but I find that pouring it in hot is much quicker and works fine so tip the mixture straight into the bowl of your ice cream maker and wait.

You could of course make a much more grown up ice cream by adding a couple of tablespoons of dark rum or some raisins soaked for a few hours in in rum, brandy or whisky. You could also add some more grated chocolate to the bowl when the mixture is cool but not set or add some finely chopped mint or a pinch of chili powder to the cream while heating it. The possibilities are endless.

The flapjacks have run out and I will bake lemon cakes tomorrow. I will also make lemon squash from my mum’s recipe.

3 Lemons – juice and rind thinly grated. Do NOT put any pith in

One and a half lbs of sugar (granulated).

One and a half pts of boiling water.

Put sugar and acid in Large bowl; add juice and rind and then pour boiling water over and stir until sugar has dissolved. Leave to cool and then strain into bottles.

This makes approx two and a half squash bottles full.