Those readers who follow this blog will know that my family and I are keen but rather unsuccessful caravanners. Years ago we bought a brand new folding camper and then Whizz found himself with so much work – oh happy days – that we hardly used it and it sat in our drive collecting flies and bird poop and losing value. One day, when we needed a new bathroom, the pristine camper – yes we gave it a wash – was sold at half its original price.

We acquired a dog and wished we hadn’t sold the folding camper. Camping in some form seemed ideal for a family with dogs.

The recession hit us and although we have had occasional windfalls they have been swallowed up by our debt; nothing was ever left for a caravan.

When my very generous parents moved nearer to their children to be less of a burden, and simultaneously downsized their home, they shared the cash difference between the values of their old and new properties between us children. They are, unquestionably, the most generous parents on the planet! Finally we had the price of a caravan and are now the proud possessors of a 5 berth Bailey Pageant Provence.

We began our new caravan experience cautiously with a fairly local weekend away. By this time we had two dogs and our second dog, Nellie, was something of a liability in that she wanted to tear the throat out of any passing pup, but we decided to risk a trip to a dog friendly site (for friendly dogs perhaps -we hoped ours would be friendly) and booked our pitch.

All went fairly swimmingly. With our current experience amounting to a couple of years we are used to Milo’s habit of fidgeting and poking his nose into our faces on the first night away, but on that very first night both dogs were restless, not least because the site was teeming with rabbits, ducks and squirrels.

At some unearthly hour the dogs demanded to be released for a pee and Whizz, who sleeps on the side of the bed nearer the door and the dogs, and who, unlike myself, doesn’t wear earplugs, slipped into his Crocks and opened the door to take them, one at a time, out on a lead. Milo was first.

As dog and master returned from the darkness with dewy feet, Nellie, who had been waiting expectantly for the door to open, shot past them and disappeared, untethered, into the night. Now, we hadn’t had Nellie all that long so she was not au fait with our expectations regarding her behaviour. She had no intention of coming back in response to Whizz’s emphatically hissed commands.

The sound of ducks squawking by the lake and the sight of her occasionally shooting past in pursuit of bunnies provided clues to Nellie’s joyous whereabouts but one or two hours passed before, with a spectacular rugby tackle, Whizz managed to catch her as she galloped past. I remained sympathetically in bed during the debacle.

That should have told us that caravanning, although allegedly ideal for a family with a child and two dogs, was not going to be without its pitfalls.

Our second trip was more meaningful. I decided that we should have a whole fortnight away. This is not something we have ever done; work or the urgent pursuit of it has always precluded a ‘long’ holiday. On this occasion, though, I put my foot down. We wouldn’t be far from the internet, and the portable technology in our home office could probably keep the entire campsite communicating. We booked a fortnight in Dorset at Freshwater Beach Holiday Park, not the type of place that Whizz and I would choose to go for a romantic weekend but certainly somewhere that would have lots of children as company for Mavis, and activities to match.

“Ooh,” said Horace and Kerching, “we could come and visit from Wigan for the weekend – may we use your tent?”

“Of course! It would be lovely to see you,” said I, and I meant it.

“Ooh!” said the generous parents “We could come and stay in a B and B nearby, maybe take a few extra days to make it worth the journey.”

“Of course! It would be lovely to see you,” said I, and I meant it.

For our first week – on our own, the weather was perfect although the facilities were wasted on Mavis who refused to venture out alone and continued at every opportunity to commune with her technology.

The main blight on the week was when we bought each dog a bone in order to keep them occupied and to keep Nellie from throttling herself every time a fellow camper’s dog passed. Just to diverge a little a la mode de Ronnie Corbett, we noticed that many of our neighbours had erected wind breaks round their ‘properties’ and we decided to do the same. Whizz spent a very hot day hammering in posts and earned a long cold beer. The new ‘fence’ meant that Nellie couldn’t see our many neighbouring dogs and was only aware of them when they hove into view at the open entrance. Anyway, back to the bones. It transpired that they were, to say the least, not all that fresh. That night both dogs were afflicted with the galloping squits. By that I mean completely liquid s–t requiring the evacuation of their bowels at approximately two hour intervals throughout the night and some of the following day.

Eventually the weekend came when the rest of the family were due to arrive, the skies darkened and then began the well documented ‘Wettest Summer on Record’.

Horace phoned at 4pm on Friday. “We’re just setting out so we’ll see you in five hours or so.” Kerching had taken valuable travelling time to play in a football match.

Dinner had been arranged for about 7 to give Horace and Kerching time to put up their own tent and settle in – now not going to happen. Mum and Dad were sitting in the awning with alcohol clutched in their little hands as I turned wanly to Whizz and suggested that we erect the kids’ tent for them. Being the easy going and uncomplaining man that he is, Whizz concurred. The rain abated a little and we set off with tent and mallet to do the parently thing.

We did have a lovely time with the family, feeding H and K who had bought no equipment, and hosting rainy evenings in the awning, sitting lop-sidedly in potholes, downing gin and vodka and listening to the rain on the roof.

This brings us to the two short breaks we have managed this summer. The first was a weekend with fellow caravanners who live in Witney. We have been promising to get together for ages but the time was never right. We organised a weekend in Gloucestershire and took an extra day, Thursday, so that I could visit my old friend Biggles, who had finally and almost fatally, had an accident while paragliding.

As soon as we arrived Mavis started complaining of severe pain in the region of her appendix and of feeling sick. Then she was sick and lay on the seat in the caravan while Whizz and I set up camp wondering at the lengths young people will go to in order to avoid a few simple chores.

We had a meal – Mavis’s sickness had miraculously worn off – and played cards. Then we made up our beds ready for an early night. We donned our jim-jams and were about to hop into bed when Mavis was violently and fountainously (a good but non-existent word until now) sick and once more doubled up with pain.

The internet was consulted and we decided it could be appendicitis. Once more unto A and E did we head. Have I written yet about my own trip to A and E? I may not have done, it will follow later.

On Friday Mavis was operated on and stayed in hospital overnight. Our friends cancelled their weekend with us and we met them for lunch and then visited Biggles on Sunday before heading home.

The owners of the caravan site at Winchcombe, a Camping and Caravanning Club site, were incredibly helpful, giving us a free night as we had been absent from the caravan on Thursday.

We have just returned from a second caravan sortie, this time to the fairy tale town of Conwy in North Wales. We took a friend for Mavis, Amenable, or Amy for short. She was a great success, fitting in with us and even being helpful!

After a slightly stressful hill climb to our pitch we set up camp without incident, meeting other dog owners across the way and along the road. On the recommendation of another camper we discovered a huge and almost empty beach and threw balls for the dog in the brilliant sunshine. 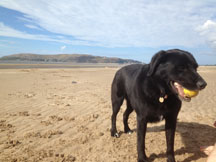 We ate fish and chips at the quay, admiring the yachts and dinghies bobbing in the estuary. Later we climbed to the top of our camp site to admire the view of the river Conwy meandering in the valley below. 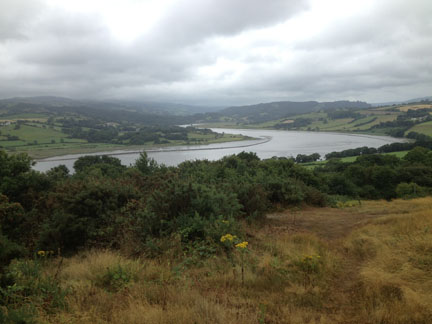 One of the reasons for choosing North Wales was to allow the three children: Mavis, Amy and Whizz, to go on the longest zip wire in Europe. I sensibly settled down in the caravan for a whole day of writing. As I worked I listened to the comforting sound of the rain beating on the roof.

Imagine my dismay when I was rudely interrupted from my stream of thought by a telephone call from Whizz. The exhaust had dropped off the ruddy car right at the edge of the quarry, where they had just sped at 80mph suspended flat on their fronts (not in the car, you understand). Would I please contact the RAC, to whose services I am entitled through my bank account.

Two and a half hours later the man from the RAC was apparently very damning about our local garage, which had shoddily replaced the section of exhaust now reposing on the ground under the car. The man made a temporary repair and gave Whizz the card of a local garage. The following day Whizz dropped the car in to the man at this recommended service station and of course he didn’t have the requisite part. He ordered it but by the end of the day it had not arrived. The following day was the day of our departure, something that must be achieved by 11am. Fortunately the part had been delivered to the garage and the repair was a simple and speedy affair so we were on our way home by 10.40.

By the time we stopped for a toilet break about half way there, the exhaust was leaking again!