Sadly, but also happily, Sloggo (see The Cast) died recently. He had been suffering from MS for many years and had gone from being a teddy bear to a bundle of twisted sticks.

His funeral was held in Cornwall and Whizz and I took a day off work and travelled the 275 miles to Bodmin for the 2.30 ceremony. It was to be a very interesting day.

The funeral was held at what must be one of the most beautifully located crematoria in the country. Here is the view from the window: 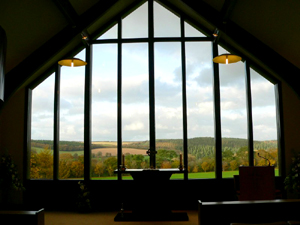 It wasn’t a religious ceremony; several of us stood up to share memories of Sloggo.

As the coffin was finally hidden from view, a buzzard flew across the sky beyond the window.

Everyone went back to the home of one of Sloggo’s oldest friends. She and her husband had lived close to him and so were able to help with his shopping and dealing with his finances.

The gathering was entirely made up of old friends as Sloggo had no remaining family. His uncle had been Sir Rodfrey Bagnew, a one time Privey Councillor to HRH, but the family had allegedly disowned Sloggo’s mother when she married inappropriately. Sloggo should have been quite well to do but fate dictated otherwise.

The old friends included both Sloggo’s ex-wives and a significant lover. Also present apart from myself were my two ex husbands and my current and final husband. There were others of course and I hadn’t seen most of them for about 20 years or more.

Being confronted with my first husband, whom I hadn’t seen for thirty six years was, to put it mildly, a stomach churning experience. I think we both pulled it off quite well but I doubt that we will repeat the experience.

In the evening we all sat around the dinner table eating very average food and reminiscing. We told the oldest of old jokes and laughed at them because we remembered the times we had told them before.

We were all grey, ageing, in many cases balding, but that night we were once again young and full of hope.

Sloggo would have loved it.

14th May, 2012: As an addendum, and to add a bit of levity, As we emerged from the crematorium into the light of day, I sniffed the air and asked, in my usual non-connective way “Can anyone smell smoke?”. Those around me who heard, stared at me in disbelief. Whizz still giggles about it over a year later.